Uber is in more than 450 cities around the world, and BCom graduate, Daniel Odoi, who joined their Melbourne team under the company’s graduate program shares his experience with us.

Ridesharing app, Uber, has disrupted the traditional business model of point-to-point commuting. Originally designed to link riders with drivers of premium cars in metropolitan cities, the popularity of the app has seen the business grow into a global organisation that is “changing the logistical fabric of cities around the world,” according to Uber. The company has also created a new income platform for people looking for flexible working options, while stimulating commuter choice and transport options. With claims it has also contributed to reduced drink driving on our roads, the broader positive impact to society is evident.

While Uber has faced protests and roadblocks, the ride-sharing company seems to be winning over local governments, with Victoria and Tasmania the latest states to embrace the service. (Uber are in discussions with the newly elected Northern Territory government.)

Daniel Odoi, Bachelor of Commerce alumnus and 2015 Valedictorian, is one of 30 employees based in Uber's Melbourne office. The 23-year-old was a loyal passenger prior to joining the company, and still uses it multiple times a week. “My first-ever experience dates back to 2013. My partner at the time was shocked to see a vehicle pull up within minutes of requesting a trip and to have a driver identify me by first name! Despite trying to keep my cool about it all, what she didn’t know was just how shocked I was as well,” he admitted.  “However, I can now comfortably say I'm a huge fan, and with our new food delivery platform, UberEATS, I use it more than ever. You can’t go wrong with meals from Melbourne’s best restaurants being delivered to you in around 30 minutes!”

Returning from Montreal, Canada in February 2015 where he had participated in the International Case Competition program, Odoi was give the opportunity to join Uber as a part-time support representative. With plans to see Europe after his degree, Odoi jumped at the chance to save up for the trip, and accepted the offer to begin working at the company’s funky Cremorne office.

A few months into the role, I quickly realised I was working in one of the most remarkable teams I’d ever been in. Daniel Odoi

Soon after, around the time of his graduation, a graduate role became available. “I was incredibly lucky to have joined the team during such an exciting period and haven’t looked back since!” said Odoi. His current role as Operations Coordinator sees him managing the communications and engagement experiences of driver-partners across the Australia-New Zealand region. 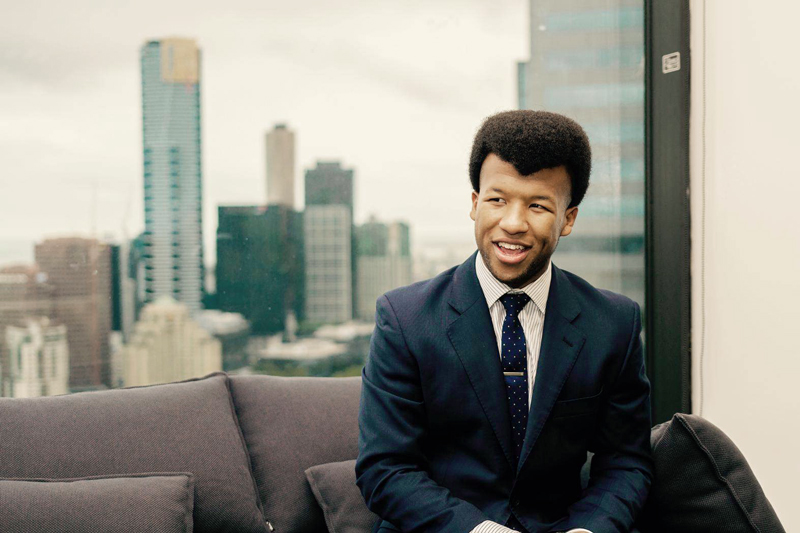 Odoi believes there is no better time to be part of the Uber team than now, particularly as ridesharing is increasingly welcomed across most states and territories. “It’s been great to see ridesharing recognised for the benefits it can bring to communities, as well as the tangible impacts it has on making transport in cities safer and more reliable,” he explained. The competitive advantages disruptive companies like Uber offer the economy is not lost on Odoi, who feels these pressures will “challenge businesses to be more innovative, and think more creatively, in order to deliver a magical experience for customers every time they use their service or product.”

Understanding that this means the company faces new challenges only adds to Odoi’s excitement. He acknowledged, “It’s nearly impossible to predict what the business will look like or how it will operate in a month, six months, one year or longer which means that we are constantly adapting to change at a rate faster than traditional businesses.”

In fact, this is precisely what attracted him to the BCom in the first place. “I chose to major in Economics because I believe there is a fundamental beauty in the concepts, assumptions and models that can be derived from it. Beyond being useful for hypothesising and rationalising economic outcomes in markets, I’m constantly amused at how many seemingly ‘non-economic’ day-to-day observations can often be attributed to some form of economic theory,” he said.

During discussion around how he has carried his BCom learnings forward into his current role, Odoi quickly noted that teamwork and collaboration were key functions.

There isn’t a day that goes by in which I’m not trying to solve a problem with someone or asking for feedback. My time and experiences though the BCom provided me with countless opportunities to enhance my interpersonal and collaborative skills. Daniel Odoi

He also shared the following tips in getting the most out of the BCom experience and how it has guided him in the work environment:

We're always looking for smart people who want to work hard to solve real world problems and many of our most successful Australian employees have come to us with a background in commerce. Matt Denman, General Manager, Victoria & Tasmania, Uber

Bachelor of Commerce graduates are highly sought after, and are valued for the depth of their education and their broad range of skills.