Referring to the "unlikely" scenario Professor Garnaut outlines of high inflation and high interest rates. If portion of the globe lost confidence/trust in $U.S? Would that lead to inflationary pressures?

There is so much US public debt held overseas that a widespread loss of confidence and selling of US dollars would cause a depreciation of the $US and a rise in US dollar interest rates. The US is so fundamental to global pricing and to global financial transactions that this would lead to big increases in commodity prices and more generally to global financial instability. It would be a rough time for the world economy. As I said in Lecture 3, there would be no safe ports in this global cyclone.

What’s your view on the secular stagnation hypothesis and its impact on globally low interest rates?

Secular stagnation is a name for a real phenomenon: a tendency for global savings to exceed global investment at positive interest rates, so that normal falls in interest rates cannot restore economic activity and employment to acceptable levels. Yes, that’s the world we are in at the moment. In my view, that is the world we are in for the foreseeable future, with establishment of Full Employment and optimal rates of economic growth dependent on Government-financed activity.

Went to Melbourne city today and it was quiet, as quiet as 2 weeks ago. What if the government doesn't spend up?

If there were no big increase in the budget deficit to expand and then maintain demand this year and for a number of years as we return to Full Employment, we could expect stagnation at high levels of unemployment for an indefinite period.

Local economics is one thing. Your thoughts on the biggest external risk? Quite a smorgasbord to choose from... to help with an abridged question - do you see China or the US as our greatest threat!?

Sino-US conflict is a very big threat to Australia.

What does ‘tax on rent’ mean specifically?  What are the consequences for a ‘tax on rent’ generally in order to achieve the sweet spot shown on your graph?

Best to tune in to Lecture 4.

How does Professor Garnaut get to $180 Billion deficit this year, when already; “The Morrison Government’s economic response to the Coronavirus crisis is providing $259 billion or 13.3 per cent of GDP in support for workers, households and business”? Given the MYEFO last year suggested a surplus of only $12 Billion or so, is the answer because some of the planned expenditure is diverted to stimulus?
Also be interested to see a slide which shows the true extent of consumption contraction. Seems to me the picture looks like this; 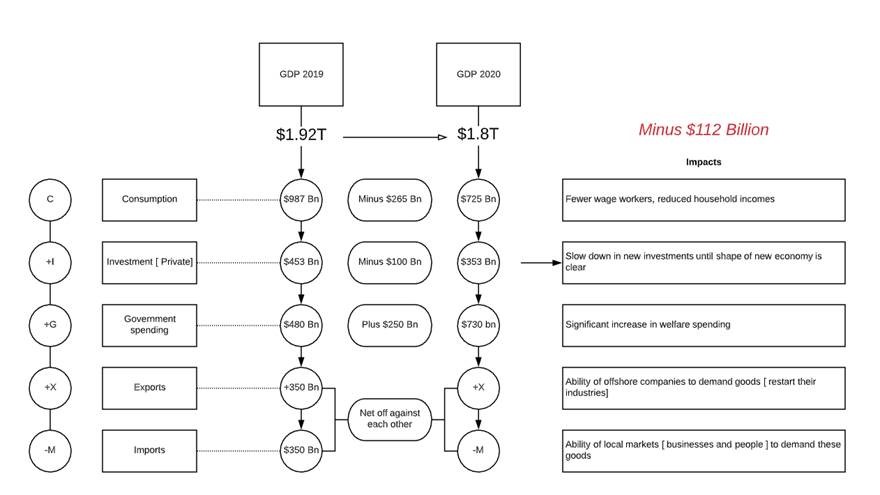 Good work and good thinking. Some of the announced stimulus is this financial year (2019-20) and some next (2020-21)—hence my “perhaps about” $90 million this year and “perhaps about $180 billion” in 2020-21. The latter is my judgement of what might be necessary to put us on a path to full employment. Whether the latter is the right amount will depend greatly on how much activity increases in the Restricted Industries as regulatory restrictions are removed. There is colossal uncertainty about the continuing behavioural responses to the pandemic. There is also uncertainty about the final extent of the downward international pressure on Australian economic opportunity, including from the problems in the bilateral relationship with China—except that we know they will be very large.