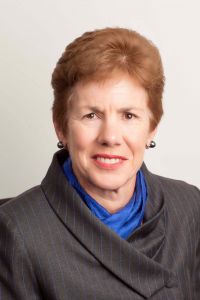 Dr Williams has had a distinguished career as a senior economist and senior executive in the Victorian and Australian public service for over 30 years.

Dr Williams has made extensive and continued contributions to the governance of the University through membership of the boards of the Faculty of Business and Economics and Melbourne University Sport; she has also been a Fellow of St Hilda’s College since 1997 and Principle Fellow since 2018.

Dr Williams is currently on several boards at both Commonwealth and state levels and is a Fellow of the Institute of Public Administration Australia.

In 2017, Dr Williams was appointed as a Member of the Order of Australia for her significant service to public sector administration, and to economic and public policy reform in Victoria. Dr Williams was awarded the Business and Economics Alumni of Distinction Faculty Award in 2019.

A competitive athlete, Dr Williams held several Australian athletics records. Her achievements in sport include four Blues at the University of Melbourne and representing Australia at the International Association of Athletics Federations World Cross-Country Championships in Morocco (1975) and Ireland (1979).