Five accounting champions have been inducted into the Australian Accounting Hall of Fame for their significant achievements and contributions to the field.

More than 120 guests from government, academia and the accounting industry came together to celebrate and honour the new inductees at the 11th Annual Dinner and Awards Ceremony of the Australian Accounting Hall of Fame.

The Head of the Melbourne University Department of Accounting, Matt Pinnuck, was joined by the Directors of the Centre for Accounting and Industry Partnerships - Brad Potter, Stewart Leech and Kevin Stevenson - and the Hall of Fame Director Phill Cobbin. 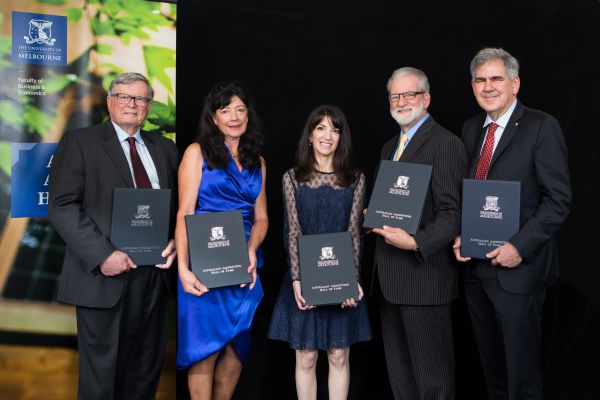 Professor Roger Simnett has a long history as a standard setter and has been extremely successful in developing new auditing and assurance standards, particularly as related to sustainability assurance and assurance of non-financial information. The very fact that after long periods of being a member of both the Australian Auditing and Assurance Standards Board and the International Auditing and Assurance Standards Board, he continues to be asked to serve on these committees and task forces culminating in his appointment as the Chair of the AUASB and reappointment to the IAASB, is a strong indicator of his success and reputation in this area.

Mr Michael Andrew’s influence on the accounting discipline so far includes: changing Government procurement rules to exclude businesses that do not have a satisfactory tax record; the development of whole-of-government strategy to combat the black economy including the establishment of the Black Economy Standing Taskforce; the establishment of the Black Economy Advisory Board; a commitment to reform Australian Business Numbers for the first time in nineteen years; the setting up of new strike teams within the Australian Taxation Office and the Department of Home Affairs to combat black economy activity and legislation to introduce a $10,000 cash payment limit.

Professor Lee Parker is a longstanding, dedicated and distinguished academic based in Australia with an enviable national and international reputation, especially for his research and publication record, substantial exemplary journal editing experience, and leadership in the growing interdisciplinary accounting research community. Lee Parker is a truly renowned accounting academic, with few, if indeed any, of his equal in qualitative interdisciplinary accounting research.

Professor Stephen Penman enjoys a major international reputation, via some 60 articles in top-tier journals and two acclaimed monographs, for his work in the fields of equity valuation, security analysis and the links between accounting and economics. He has also made important contributions as educator, PhD supervisor, journal editor, and office bearer in academic and professional associations. His reputation extends beyond academia and he has served as consultant to or director of major firms engaged in the financial services industry.

Ms Ruth Picker is one of Australia’s most distinguished accounting standard-setters and practitioners. Commencing with a secondment to the Australian Accounting Research Foundation, her standard-setting involvement progressed through memberships first of the Foundation’s Urgent Issues Group then of the Australian Accounting Standards Board.  For the latter she served as deputy chairman then acting chair. As a practitioner with Ernst & Young (EY), she became one of the firm’s global leaders in the field of International Financial Reporting Standards and the firm’s representative on the key International Financial Reporting Interpretations Committee. More recently for EY, her responsibilities have extended to the firm’s diversity, ethical-behaviour and risk-management programs.

Nominations for the 2021 Australian Accounting Hall of Fame awards will be open on 1 July 2020.